Robert Jeffrey II is a freelance writer based out of Atlanta, GA and his portfolio includes a multitude of work in the 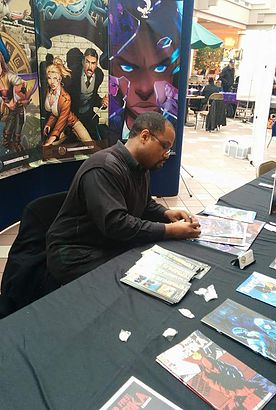 arenas of print/ web journalism, and comics. He’s written for such publications as J’Adore Magazine, The Atlanta Voice Newspaper, Black Sci-Fi.com, and Urban Voices in Comics. He was chosen as a participant in the DC Comics Class of 2017 Writers Workshop, is currently the Editor In Chief for BlackSci-Fi.com, and is a guest contributor to the Tessera Guild blog.

His comics work includes contracted client work, including custom comics and animation scripting/editing duties for clients such as the Centers for Disease Control and Prevention (CDC), Nitto Tires, the Soul of Suw comic book series, and HERO Comics’, The Messenger.

Robert is a recipient of the 2008 Miller Brewing Company A. Philip Randolph Messenger Award/ Journalism Award of Excellence in the field of AIDS/Health, and his creator owned series, Route 3, won the 2014 Glyph Comics Award for Best Cover.

He’s yet fulfilled his dream of pop-locking to save a community center.